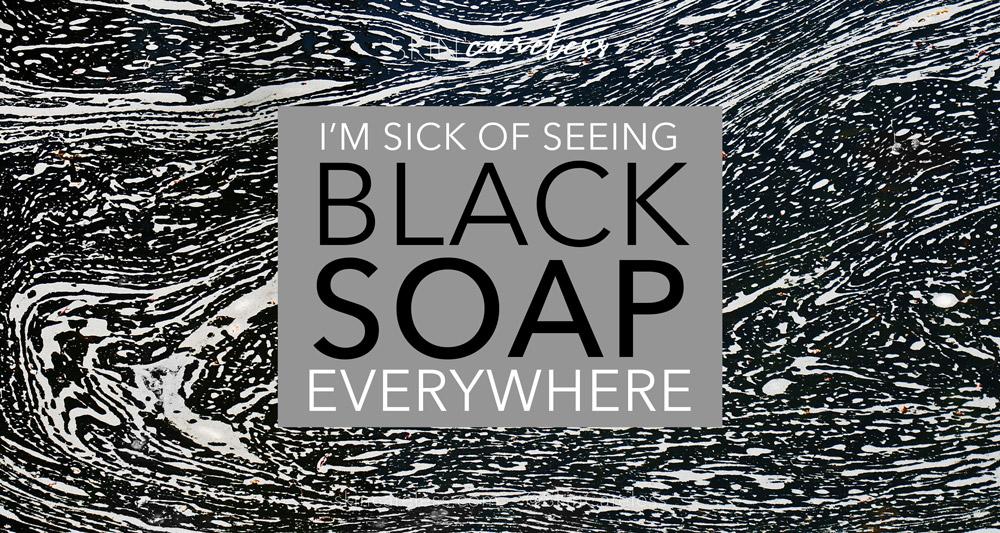 How many times do I have to say it?

This feels a little bit like I’m putting a huge target on my back. I’m know that I’m taking on a skin care behemoth and picking a metaphorical fight against a lot of people out there. But I’ve got to do what’s right in the name of healthy skin. And if you’re using black soap as a daily face cleanser – raw or otherwise-, your skin is probably calling out for some backup.

Contents hide
1) Why is African Black Soap so popular?
2) What’s black soap made of?
3) So what’s the issue with black soap?
3.1) Low pH
3.2) Overly harsh
3.3) Hyped up claims
4) But then how can you explain the real results people see?
4.1) It forms part of someone’s first real routine – beginner’s improvement
4.2) People are hyping up the effects for online exposure
4.3) Misleading studies
5) So, should you use African black soap?

Why is African Black Soap so popular?

I love the internet – I do. And that includes social media and everything it’s given us. One thing I don’t love, however, is the proliferation of trendy ignorance and misinformation.

The current popularity of African black soap – be it from companies like Shea Moisture or through local sellers or even homemade – is no less than a social media frenzy. Log onto Pinterest, Instagram or Twitter and you’ll see post after post claiming that black soap (alongside Witch Hazel, but that’s another issue) is solely to thank for the poster’s immaculate skin. Everyone from well-known celebrities to alarmingly young girls-next-door are claiming that this product is all you need.

The claims surrounding this type of soap as part of a skin care routine are vague, but seem to centre around its alleged ability to dry out acne and lighten pigmentation. I’ve also seen mention of exfoliation, soothing irritation and rashes, Vitamins A and E, caffeine and even that it offers UV protection (alarm bells!).

Let’s find out a little more about what makes certain soap ‘black soap’, to get to the bottom of the validity of these claims.

What’s black soap made of?

All soap is made using a combination of oils and lye – a highly alkaline hydroxide usually produced from ashes. Mixed together, they form a product which cures over time, and the resulting solid suds up on contact with water, with an incredible and counter-intuitive ability to cut through the skin’s oils. I’ve actually devoted a whole post to the science of soap and why synthetic alternatives are often superior.

Traditionally, black soap was and still is made by a variety of groups in Africa due to its cheap and locally-available nature and effectiveness as a cleaning agent. What gives black soap its name is the kind of ash that goes into it during processing. This ash is what is mixed with water to create lye, just like the lye produced in factories for regular white soap. In these clever traditional methods, a mixture of plantain skins (similar to bananas), palm tree leaves, shea tree bark and/or powdered and dried cocoa pods are thoroughly roasted to create the ashes used to make the lye needed for soap to be, well, soap.

In both traditional and commercial formulas, the lye base is mixed with a variety of fats and oils, like olive oil, coconut oil, palm oil and/or shea butter, and this is cooked for a long period to create the final uncured soap product. It’s then left to cure and forms a dark or brown-hued soap over the coming weeks.

So what’s the issue with black soap?

Despite the ingenious production method, utilising ash-based lye which can be made with fairly little expense or technology, there are still some major drawbacks to both traditional African and store-bought black soap which make it bad for your skin’s health.

Lye is very alkaline. It will burn the skin in its plain form. So any soap, due to the nature of lye, ends up as a final product with an incredibly high pH. While the formulations can vary wildly, it usually sits around a 10 on the pH scale – that’s 1000x more alkaline than pure water, and similar to many household cleaning products. Our skin naturally hovers around an acidic pH of 5.5, which is primarily to keep infections and bacteria out through a protective layer that is referred to as the acid mantle. So soap is around 50,000x more alkaline than the skin. Regularly using such a high pH product can damage the acid mantle and irritate and aggravate the skin. Especially when homemade and unregulated, soaps like this can actually cause burns if left in direct contact with your skin for too long.

Soap is a very good cleanser. It’s excellent at removing strong body odour and grease. Soap breaks up surface tension between debris and your skin, so it can be washed away easily with water. But your face simply doesn’t need that strong of a cleanse. Removing the skin’s oils so completely and harshly every day will lead to dehydration. Some natural oils should be allowed to remain on the skin to, again, protect the pH balance and keep microflora in check. Many reports say that this soap results in your skin feeling raw, cracked and peeling. Mild synthetic detergents in a pH balanced formula are far superior. Take the synthetic and soap combination bar by Dove, for instance, as an example of how it’s possible to bring the benefits of soap to your routine in a more controlled way – with a little adjustment.

The final kicker is that black soap simply doesn’t do anything more than a normal cleanser does. Be it acne-fighting or pigmentation-lightening you’re after, it lacks active ingredients at the proper concentration and formula to cause real improvement. Minerals like magnesium and potassium do not offer topical benefits, and any amount of vitamin A or E or anything else in the soap would not be on the skin long enough to matter. There are no proven, studied ways that black soap could positively influence your skin any more than another soap or cleanser. It’s just not special in any big way, like people claim.

But then how can you explain the real results people see?

If black soap is so objectively lacking and maybe even dangerous for your skin, then why do people seem to like it at all?

At its core, this is just a soap. A soap with extra ingredients, sure, but a soap nonetheless. It will clean your face. Oftentimes people who claim big things about this soap start with a fairly minor skin issue, and the mere implementation of any kind of routine – even a half-hearted one with a potentially dangerous product – is the final push it needs to clear up entirely. For many people, this is the first product they may have tried routinely and consistently. And any product could offer improvement in that scenario. It’s not the ingredients or the product or magic, but the presence of the routine itself. And people love to share what works for them.

People are hyping up the effects for online exposure

The zealous social media promotion is also easily explained. Claiming that you’ve found the solution to acne and hyperpigmentation with something so simple and easily available, and guaranteeing it’ll work for everyone, can not only earn virality and views but also a sense of purpose and helping others. You provide them hope through sharing your experience – even if you have to gloss over the bad parts (which include tingling, tightness, dryness, irritation, sensitivity, oil compensation and more). It’s a good feeling. Plus people love things labeled ‘natural’.

I will say, there are studies showing that people report benefits of using black soap. The key word here is report. Self-reported studies are notorious for being weak to the placebo effect and confirmation bias. People want to believe in the simple solution, and will often feel pressured to offer a positive opinion or show some sort of improvement or change. They’re looking for it, so that’s what they see. But journalists and bloggers skim through these results, looking for evidence to support their case, and jump to conclusions not made in the study itself. There is yet to be any published evidence as to how or why black soap could be better for skin than other cleansers.

So, should you use African black soap?

That choice, as always, is totally yours. Science tells us that African black soap is bad for your skin. That being said, you won’t burst into flames just by using it once. I simply believe there are better, more research based and gentler options to improve your skin’s appearance and health.

Not only that, but cleanser isn’t the place in your routine to make miracles happen. Your actives, serums and treatment steps are where the real magic happens. Technology has come so far – those products are carefully formulated and stringently tested to adhere to skin’s pH and deliver effective ingredients to tackle certain issues like congestion or cystic acne to where they need to be in a safe and gentle manner. They can remain on your skin safely and do their work without the same risks. And you’ll be able to tailor your routine and find the perfect fit for your skin no matter what your issues are.

But if you’re lucky and black soap seems to work great for you, and you don’t want to stop, that’s fine. Skin care, after all, is complicated, individual, and finicky. So, just know that if you can’t live without it, consider dialing back on the frequency to avoid overcleansing and leading to dehydrated skin territory.

And finally, be cautious about recommending it to others. When you recommend products on anecdotal experience, and don’t research or share the possible risks, nor make it clear that skin is individual and to exercise caution, you are putting them at risk. Some people are desperate and impatient and have cystic acne and sensitive skin, and may be more susceptible to the aforementioned side effects, all while wasting their time when there are better options out there.