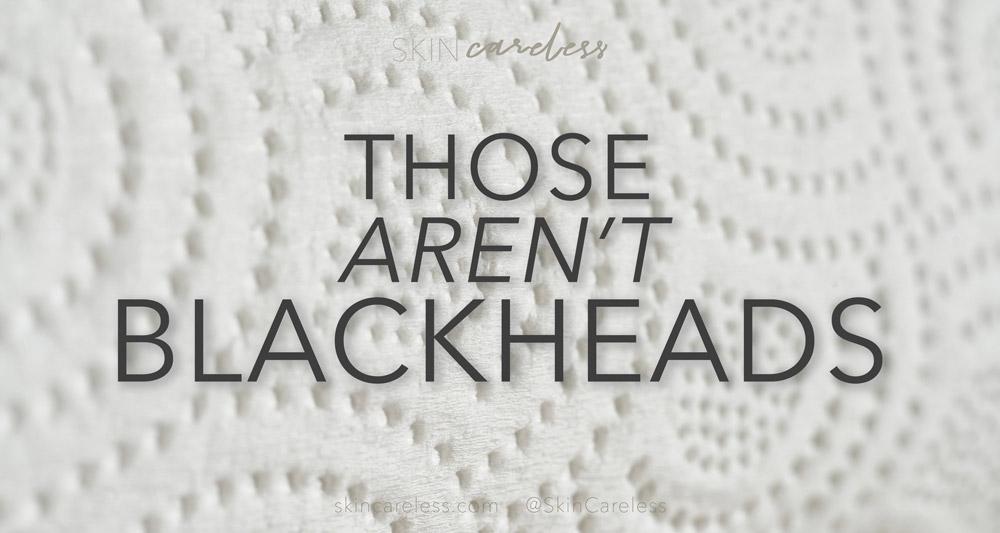 Speak to almost anyone with problematic skin and the first thing you’ll hear about is the absolute sea of blackheads they have on their nose that they’ve had forever and can just never seem to get rid of. It’s practically an epidemic!

But why does it seem like EVERYONE shares the struggle with these ‘blackheads’?

Even if you squeeze them and see satisfying little bits pop out, they come right back! You might use pore strips and see the pesky little specks on them afterwards (satisfying, much?), but in two days they’re just as bad as before! Why are they so stubborn?

Well, these pesky spots all over your nose, cheeks and chin probably aren’t (all) blackheads. They’re more likely to be sebaceous filaments, and squeezing them isn’t the way to get rid of them for good. Let’s answer some of your pore-related questions.

What are sebaceous filaments?

Sebaceous filaments are a grey or yellowy white collection of “bacteria, sebaceous lipid, corneocyte fragments and hair” that sit inside a pore, where oil comes up through the skin. In simpler terms, it’s dead skin, hair and oils. If they’re removed, they resemble a little fine cone shaped strand which is where they get their name. These deposits transfer oils out from the bottom of oil gland, where it’s produced, to the surface of the skin, where it’s needed.

They’re visible because as the protein in our skin oils spends time in the air and oxidises, it turns dark. As you enter puberty and your skin gets oilier, the appearance of sebaceous filaments increase. This leads many teens to think they have a blackhead problem.

It doesn’t help when skin care companies advertise products like pore strips, baking soda scrubs (I’m looking at you, Biore) and peel off charcoal masks. They often use images of a nose covered in normal sebaceous filaments and healthy pores to represent ‘dirty’ skin and because of this we have a warped perception of what’s normal. This is a perfectly normal nose with sebaceous filaments:

The most affected parts are most often the oiliest: the nose, chin, cheeks and forehead. You can tell them apart from blackheads in two ways. Firstly, they appear as light yellow or grey specks inside pores. Secondly, they form a repeating pattern across all the pores in larger groups instead of alone.

Blackheads, which are an abnormally blocked pore – meaning an excess of dead skin or oils has somehow dried and plugged up the pore entirely, are a much darker black and usually come alone or in very small clusters. They’re also far less common than sebaceous filaments, and most people will only have one or a few on their skin at a time,

How common are sebaceous filaments?

Sebaceous filaments can be found on almost every single person’s face. They’re a natural byproduct of how our skin naturally lubricates and sheds itself. They are constantly growing and regenerating. Some people’s might be more or less visible because of natural body chemistry or genetic pore size, but if you’ve got pores then you’ve got these. Because they’re mainly made of oil, the oilier your skin the bigger they might be and the faster they might come back. Because of this they are very common among teenagers, especially males, whose hormone levels can lead to extremely oily skin.

Sebaceous filaments are collection of our skin’s natural debris created by the ever-constant replenishing of the skin surface – so they are going to keep coming no matter what you do. When you remove them, they will just fill back up again in a matter of days with new skin and oil. Unlike blackheads, they are not an unhealthy blockage that needs to be removed but rather a recurring collection of the latest stuff our skin has produced. Squeezing isn’t worth the damage it can do to your skin.

How do you reduce the appearance of sebaceous filaments?

Now we’re talking! Whether they’re natural or not, most people want to find a way to reduce their pore and sebaceous filament size and appearance. The best and main way to keep them under control is to build a targeted skin care routine that you do consistently, but there are a few things to focus on if you want to reduce the appearance of sebaceous filaments:

Lots of people (myself included) swear by the oil cleansing method to loosen up gunk like sebaceous filaments. It’s a way of pre-cleansing the skin by applying an oil before your normal foaming or creamy rinse-off face wash. The theory is that ‘like dissolves like’ – so you can dissolve the oils on your skin using a carrier oil (my two favourites are Jojoba oil and Squalane oil) or an emulsifying oil like Softymo Speedy Cleansing Oil that rinses clean. Gentle massage with your oil get will into those pores and loosen the filaments up, and if you’re lucky, you might feel ‘grits’ pop out; tiny loosened filaments that feel grainy like sand. This should then be followed by your regular cleanser to remove the oil residue and any debris you’ve loosen along the way.

Salicylic acid aka. BHA (beta-hydroxy acid) is a wonder ingredient known for its pore cleansing and anti-acne properties. It‘s oil soluble, so it can cut right through into the bottom of the pores and can actually dissolve the bonds between the protein that makes up our dead skin and hair. In this way, it encourages your skin to release any trapped gunk more easily, clearing out sebaceous filaments. BHA, as an active ingredient product, is applied straight after cleansing. When used regularly, salicylic acid will keep sebaceous filaments to a minimum and also prevent new acne and blackheads from forming.

Stridex is a popular choice because it’s affordable and at the correct percentage and pH to work properly. Currently I’m using CosRX’s BHA Blackhead Power Liquid.

Clay can fight sebaceous filaments thanks to its absorbent properties. As masks made from rhassoul or bentonite clay dry, they suck up the excess oil that sits in the pores, reducing the likelihood of oversized sebaceous filaments. Matte skin also reflects less light, minimising the visibility of pores and other texture.

I use Freeman Avocado and Oatmeal Clay Mask because it’s affordable, easy to find, and has some great absorbent and soothing ingredients. When I’m feeling like something more luxurious, I reach for Origins Original Skin Retexturizing Mask. (Tip: I often use face masks as part of self care, a bit of pampering, or in preparation for a big event!)

Doing all three of these techniques as part of your awesome skin care routine will keep sebaceous filaments at bay to the best of your abilities. Just remember that skin isn’t supposed to look flat and airbrushed up close – pores and sebaceous filaments are part of normal, healthily functioning skin! So stop steaming your face (because pores don’t open or close) and trying to squeeze these guys out.

Still confused about skin care myths you’ve heard in the past? I’ve dedicated tons of time to create a complete skin care guide just for you! It’s called Strategic Skin, and it’s designed to walk you through all the elements of skin science, common myths and mistakes, how to spot good products, and help you through rough patches all beginners experience, all using simple strategies you can rely on. Want to find out more? Check out a sneak peek and all the juicy details here.

Tell me, are you guilty of squeezing your sebaceous filaments? I used to be!

2 thoughts on “Your Neverending Blackheads Could Be Sebaceous Filaments”