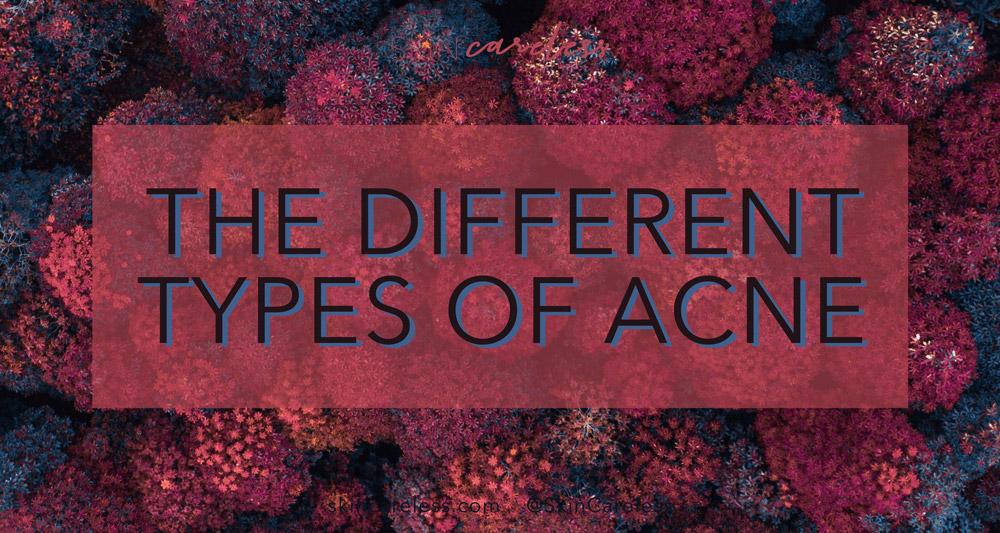 Not all acne is created equal. It’s important to understand the various ways that acne can present as so you know which ingredients to treat it with. There’s a range of acne that differs from easily treatable to chronic. Read on to learn about the types of acne and how to identify which type you have.

The two kinds of acne

There are two basic and distinct categories of acne – non-inflammatory and inflammatory. As the names suggest, one kind of acne evokes an inflammatory response from the skin, while the other does not. This leads to two very distinct presentations and two methods of treatment.

How to determine which type of acne you have

Figuring out which category of acne you are mainly suffering from is really simple. Ask yourself two questions:

Is my acne red? Does my skin look inflamed?

This kind of acne is a build up of material in the skin’s pores which has not triggered an immune response. In turn, these kinds of acne are not red or painful but can linger and tend not to resolve themselves unless treated. This is because the body does not recognise this acne as foreign and leaves it alone. Often, they can be treated with exfoliation to clear the blockage to the pore. There are two sub-types of non-inflammatory acne – blackheads and whiteheads.

Real blackheads look like dark grey or black specks in a pore. They are generally few and far in between, but can be more common on skin that is rarely cleansed or exfoliated or that is very oily. They appear mostly on the inner cheeks, chin, nose and forehead where the skin is oiliest. Blackheads are made of sebum, dead skin cells and other debris that’s sitting in a pore and is exposed to the air, drying out and oxidising the outermost portion and turning it black. They’re caused by very oily skin or a lack of exfoliation or proper cleansing.

Whiteheads or closed comedones are another common complaint. They can range from deep under the skin, colourless bumps to obvious small white pimples. Whiteheads are made of sebum and bacteria trapped within a pore, covered by a layer of skin and closed off from the air. They can be caused by products that disagree with your skin and are too heavy or oily, and a lack of exfoliation which traps debris in the pore.

How to treat non-inflammatory acne

Read on to learn the best ingredient for fighting blackheads and whiteheads.

Inflammatory acne is generally what is considered more moderate-severe. It causes swelling and redness and of course, inflammation. This kind of acne is particularly tricky because it leads to the most acne marks and scars.

Papules are red, hard swollen clogged pores. They look like small red bumps on the skin and are caused by a buildup of acne bacteria in the pore that the skin reacts to and attempts to clear out with an inflammatory response. Pustules are quite similar to papules but are filled with pus. They can look like whiteheads in that they have a white top, but they are redder and more inflamed thanks to our skin sending white blood cells to the area to treat the infection.

These two kinds of acne are more or less are of equal intensity. The final two types of inflammatory acne, however, are much more severe and often require dermatological help.

Nodules are cysts happen when the infection from acne begins or is spread deeper in the skin. They look like large, hard swollen lumps. They are covered by a thick layer of skin and so are very difficult to treat at home. These kinds of acne are the most likely to cause scarring and to recur in the same area over and over again.

How to treat inflammatory acne

I hope this article helped you to determine the specific kind of acne that you suffer from, so as to help you learn what products will work best for you in treating it.