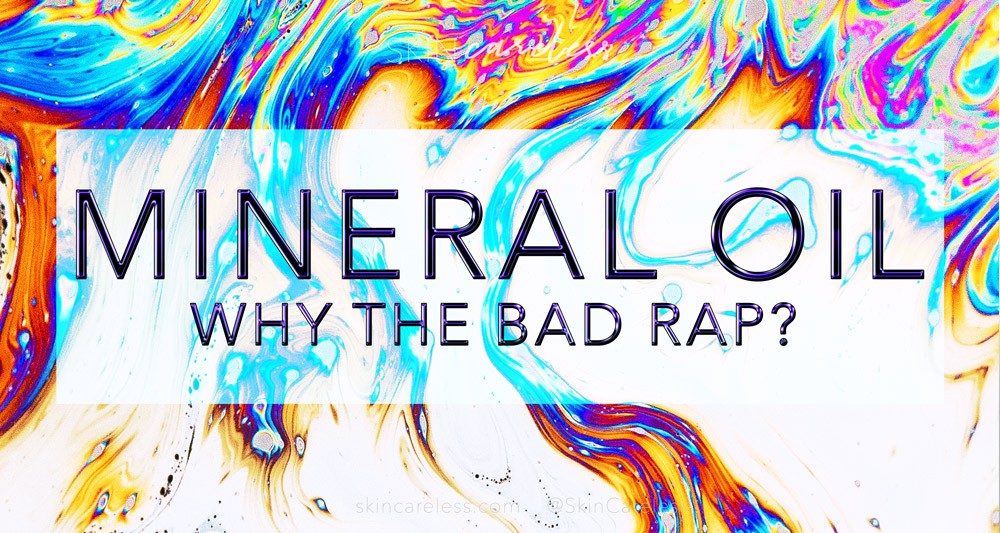 Mineral oil is the core ingredient that gives us so many staple products like baby oil, Vaseline and more. It’s a highly occlusive (water-blocking) ingredient that’s also chemically inert, meaning it doesn’t react with skin or other products. This makes it amazing as a final routine step, especially at night, to seal in all the other goodies until you’re ready to do your routine next.

Yet some people – usually those selling the idea of ‘clean beauty’ – still love to harp on about the dangers of using mineral oil in skin care. Thanks to some shoddy research work, people have been given the wrong idea about its safety and place in skin care. Let’s bust some of the common myths surrounding this awesome ingredient that you shouldn’t be avoiding.

Where does mineral oil come from?

Mineral oil is derived from the refinement process of crude oil to make gasoline and other petroleum products. It’s what’s left over when all those other less pure parts are removed. While the impuri­ties in untreated mineral oil are carcinogenic, don’t let this scare you. Cosmetic grade mineral oil is rigorously refined to a degree where there are none of these impurities left and no risk. The World Health Organisation itself says refined mineral oil is “not classifiable as to its carginocenicity in humans”.

It seems we can’t get away from ‘toxic chemicals’ and carcinogens these days. Usually they’re so vague that it’s hard to argue back, but I’ll do my best anyway.

As I said above, the carcinogenic compounds found in unrefined mineral oil are removed in the treatment process well before it reaches your cosmetics, making the mineral oil you’ll find in skin care completely harmless.

Mineral oil is not digested by the body nor stored in fat or other organs, making it incapable of building up to toxic levels. It’s in fact prescribed as a laxative because of its ability travel through the bowels. No link has been made between its laxative use and cancer incidence, so from that we can extrapolate that on the skin it’s equally innocuous. Mineral oil is chemically incapable of being absorbed into your bloodstream via the skin, as some sites seem to suggest. Claims that mineral oil is linked to higher rates of skin cancer (or any cancers) are unfounded.

I might note, however, that National Toxicology Program stated that aerosolised mineral oil might be carcinogenic. It can also irritate the lungs and cause pneumonia in some cases if aspirated, so avoid breathing it in/working in the heavy machinery construction industry. But that goes for a lot of things – what they’re claiming is like saying that water is ‘toxic’ because people have drowned before.

Myth: Mineral oil prevents your skin from absorbing moisture and thus dries it out

There’s basically no danger that you’ll ‘lock out’ the moisture by using mineral oil, or any occlusive. The moisture we care about trapping is in the deeper layers of our skin, constantly replenished by the bloodstream. Mineral oil just prevents this moisture from evaporating out into the air a.k.a. trans-epidermal water loss. Of course, don’t use a mineral-oil heavy product before serums or other active products, as the barrier it creates will hinder their effectiveness. Keep it reserved as the final step and you’ll be fine!

Mineral oil is classed as a non comedogenic ingredient. It is also molecularly too large to physically clog the pores in the most basic sense. It also does not ‘trap’ anything anywhere – whatever you put on your skin before mineral oil would stay there anyway (aside from water, which likes to evaporate). I can find no evidence to suggest that its occlusive properties are to blame for any statistically significant heightened risk of breakouts or bacteria. In fact, if it ‘suffocates’ the skin (which doesn’t breathe, by the way) as so many people claim, this would actually inhibit bacterial growth. Of course, everyone’s skin is different and your mileage may vary as to whether it personally causes you breakouts. I find it great for soothing irritation and flakiness when used as my final step at night.

Don’t let people use the fact that mineral oil is linked to mechanical engines and industry to scare you. It’s fear mongering. They use references to studies about unrefined mineral oil to further their agenda of selling you their ‘natural’ products. What we talk about as mineral oil or what you see on your moisturiser label is not the same stuff that goes into our cars. Mineral oil isn’t the bad guy – it’s a great, basic, non-irritating occlusive ingredient that I think is perfect for beginners.

8 thoughts on “The Myths About Mineral Oil in Skin Care”