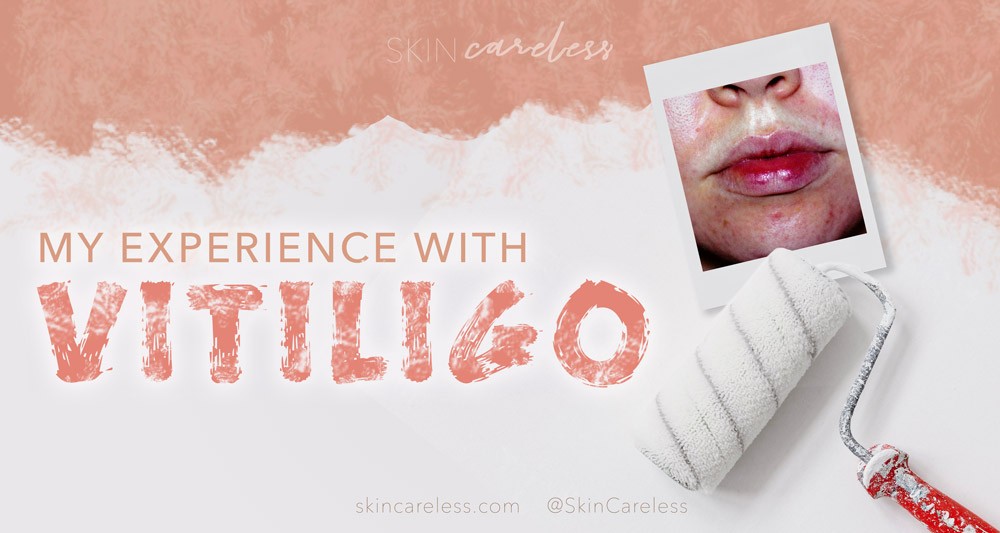 Does anybody else have those weird insecurities that they feel like nobody else but them has ever noticed before?

For me, that’s always been the permanent “milk mustache” on my face.

The history of my mystery redness

Ever since I can remember, I’ve had a problem with the skin above my upper lip.

I would describe it at the time as the area of skin around my nose always being really red, with two distinct streaks coming out from my nose. But, more strangely, right above my upper lip the edness suddenly stopped, making a perfect line an inch above my mouth.

Less-than-tactful friends in high school used to mention it often, asking me if I had a sunburn or I’d gone skiing and had some sort of weird ski mask tan line. But no, I’d say, that’s just how my face was. I had a really red nose area and didn’t know why. So I’d use concealer to try cover the redness around my nose and make it blend in better.

It took me a long time before I realised that the issue wasn’t with my nose itself, but rather the skin below it and right above my lips. It was really, really pale. And, when put in such stark contrast with the colour of my natural skin, made it stand out a lot.

Looking back at old photos, I can see that I’ve almost always had this strange problem. But as my acne and irritation and dehydration got worse (way worse) during my teenage years it really started to show up, because this area was the only part of my face that wasn’t red.

The realisation I had a pigmentation problem

It all came to a head when I first went to my skin clinic and had my skin assessed in preparation for laser treatment. They take all sorts of awesome futuristic photos that show you what the vascularity and pigmentation underneath the surface of your skin looks like.

The camera and lights on this machine are designed to pick up on subdermal pigmentation and blood vessels that are hard to see with the naked eye, so you can get a feel for how well you’ve been looking after your skin lately, and if you need any certain treatments. The photo showing pigmentation colours your skin a general brown, with darker spots scattered all over signalling little freckles waiting to come through. The redness sensor give you an overall pink tone, usually darkest on the cheeks and around the nose.

And when we saw what my skin looked like underneath, things became a lot clearer.

I remember, after taking the images, my nurse turned from the monitor to me with a surprised look. She said to me: “You didn’t say you had vitiligo!”. I looked at her with a blankly confused face, like, what on earth are you talking about? That’s when she showed me the pictures as they came out of the printer, and I was stunned.

The results were almost comical. Not only was the area of my skin extending from my upper lip to my nose immune to being blotchy and red (as demonstrated in the central photograph), but it actually wasn’t capable of producing pigment at all (on the right).

Now, I know my skin is naturally very fair-skinned, but these photos made it even clearer that this particular patch wasn’t just pale, it was straight up white.

I’d been living with vitiligo this whole time and didn’t know.

I knew vaguely that my uncle has vitiligo but I had never noticed or seen it personally. I also knew that my aunt has a thyroid condition, and two of my cousins have autoimmune issues. So this kind of thing isn’t genetically surprisingly.

When I mentally go back to high school, some of the other things people commented on about my face now come to mind. Most notably was the conclusion that my lips were a funny color. You see, I was blessed with pretty large lips. But people always asked me if I was wearing lipstick, because it looked like I had applied it unevenly and has two different sets of lip colours – an inside that was bright pink, and an outside that was almost gray and colorless. I looks like I’ve been sucking on a red icy pole. It turns out that this is actually most likely my vitiligo extending partway into my lip skin.

For me, my vitiligo’s been with me almost my whole life (at least since childhood) and has barely spread at all. For most people, their vitiligo is the kind that shows up as a small spot during adolescence and rapidly spreads until it takes over large areas of the body. But it seems like I’ve just got this one patch and nothing more.

Upon further research, it’s called ‘segmental vitiligo‘ and makes up only about 1/10 cases.

What is segmental vitiligo?

Run-of-the-mill vitiligo is an ever-changing condition, where certain parts of the body, starting from a small spot, lose all pigment and turn near-white. It’s thought to be an autoimmune reaction which causes the body to damage its own melanin cells. It spreads -sometimes rapidly, sometimes slowly – and may eventually cover almost the entire body. It can even regress spontaneously and will change a lot of the course of someone’s lifetime.

Segmental vitiligo, however, describes the case when your skin develops a vitiligo-like patch of white skin, but then it stops attacking for some reason. You’re left with permanent but unchanging patches of white skin, usually in just one place on the body.

And aside from my reservations about how it looks, medically this isn’t doing me much harm. I have to be conscious about sun care, since the area’s not able to protect itself by tanning. But then again I’m very sun-conscious anyway, and I’m so pale it’s almost the same as my normal skin, so not much changes there.

My thoughts about my vitiligo now

I have struggled a lot with the appearance of my skin in my life. But this particular spot has always been troublesome for me. Before I even knew what I was looking at, I was always subconsciously looking for ways to cover it up. I find it especially difficult because I my look at my own face really closely. But still, even to those who don’t know me well, it looks like there’s something slightly off with my pigment.

If you look carefully, my segmental vitiligo actually extends across my philtrum, around my lips and even affects the bottom too. But it’s not like I have beautiful tan skin and there’s these striking white patches (a la Winnie Harlow). It just looks a little odd naturally. Not noticeable enough, not hidden enough. So I feel like I’m in this strange place – compelled to make it more obvious or totally conceal it.

How I cover it up with makeup

I often choose to conceal these areas of pale skin. I have no problem with my skin and going makeup-free, and often still do, but covering it up well gives me a nice blank canvas to play with makeup looks and have everything be even-toned. otherwise, it can look a little like I was overzealous with the highlighting concealer or applied my lipstick like a two year old.

Now that I know that this area of skin doesn’t have any surface vascularity, it’s obvious that concealing my vitiligo is a matter of adding back in those red tones it’s missing. I do this using a red cream blush formula applied heavily over just the pale area, mimicking how you might use a tone-corrective concealer.

Then I go over that same area with a high-coverage concealer that’s definitely no lighter than my natural skin, to bring the overall shade down to make.

The next thing to tackle is my lips. I need to redefine the edges so that it’s more obvious where my lips end and my skin begins. I do this using lip liner. I match the color to the inside of my lips, not the outside which is quite pale. It’s all about redefining the edges of my lips. I bring the liner inwards all the way to meet the pigmented parts, and voila! After that, it’s a matter of setting with a strong setting powder and praying to the makeup gods.

All together, that is able to make it 90% invisible, which is good enough for me.

Of all the skin conditions to have, vitiligo is interesting because it’s essentially medically harmless but mentally very challenging. To have so little control over a huge aspect of your physical appearance – your colouring – can feel overwhelming.

I’m at peace with my skin. I’m just happy I now know what’s going on, so I can arm myself with knowledge and inform others if they for some reasons ask why it looks always like I’ve just drunk a glass of milk.